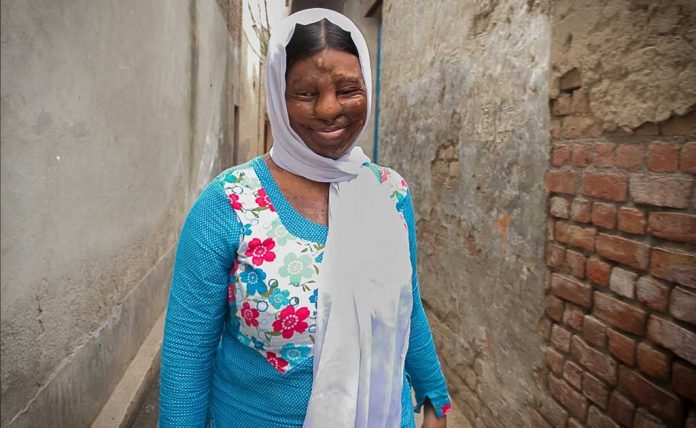 Memories flood Shaina as she accompanies me to Shantiniketan Public School in Ghaziabad, Uttar Pradesh, where she was once a teacher. The 30-year-old has undergone 19 surgeries since she last visited the school nine years ago.

It was August, 2009. Two men had come to her office to discuss a child’s nursery admission. When Shaina turned around to give them a form from the cabinet, they quickly opened a steel tiffin box and threw acid on her. It was a revenge for refusing a marriage proposal from a man. The incident completely changed her life.

The attack had left the teachers at their wit’s end and so, medical help was delayed. Some suggested they pour water on her, others said milk. All Shaina remembers is the excruciating pain. The front of her kameez fell off her body like a burnt sheet of paper. One of the teachers rushed to fetch a shawl to cover her, and then she was taken to the hospital.

She was young, had passed class 10, and was doing very well as a teacher of a primary school. The founder of the school had given her additional administrative responsibilities too. Everything was looking up for her and she did not want to be tied down with marriage.

“The people who did this to me are behind bars now. The attackers were awarded life imprisonment after one and a half year of the incident,” Shaina says. The owner of her school helped her arrange for a lawyer.

We go to her home, which is five minutes away from the school. Shaina’s parents, Nawabuddin and Shameem Bano, had supported her throughout.

Though the government pays for surgeries for the acid attack victims, the subsidy does not cover post-operative care. Shaina’s father, who worked as a tailor with a fashion brand store, sold his home to pay for the care. The cost ran in lakhs of rupees. With his meager salary and a family of seven children to support, he spent more than he could afford.

Today, both her parents are restricted to the bed in the tiny, one-room rented accommodation. But Nawabuddin and his wife are still working. From their bed, they stitch cushion covers, and Shaina helps them pack and sell it.

After four eye operations, two surgeries for recreation of eyebrows and eyelids, four nose surgeries, two arm surgeries, one lip surgery, four hand surgeries and two neck operations, Shaina has discarded the burqa. For years after the acid attack, desperate to escape the stares, and sometimes the look of fear in people’s eyes, she kept her face veiled.

Still blind in left eye, Shaina hopes to raise enough money to get an operation that will bring her vision back. She wants to chip in with the family income and help her brother. The amount is large, Rs 2.5 lakh, but Shaina is sure it will happen.

Even though the acid attack left her scarred physically and emotionally, Shaina is determined to help others in a similar plight.

From her home near the Delhi-Uttar Pradesh border, she travels 25 km way to Delhi’s Ram Manohar Lohia Hospital twice a week. It was where she had got her treatment. She changes two autos, takes a metro and then walks to reach the hospital. Today, she uses her contacts in the hospital to help other acid-attack victims.

In 2013, Shaina jumped from this balcony in an attempt at suicide. The trauma, pain and the fear of an unknown future had driven her to depression. She survived, but with a bruised body and a broken leg.

Today, she is brimming with positivity. “You live only once, and it is up to you what you want to make of life,” she says. “Someone threw acid on me and my life almost ended there, but I picked myself up. I would like other acid attack victims to think the same way and move on,” Shaina says.