Home Gallery He Suffers From Disease That Affects 1 In 4 Billion
Share on Facebook
Tweet on Twitter
Rupesh, 21, is living with a rare incurable disease in the village outskirts of Allahabad in Uttar Pradesh. Studies suggest that one in four billion births across the world have this rare genetic disorder. 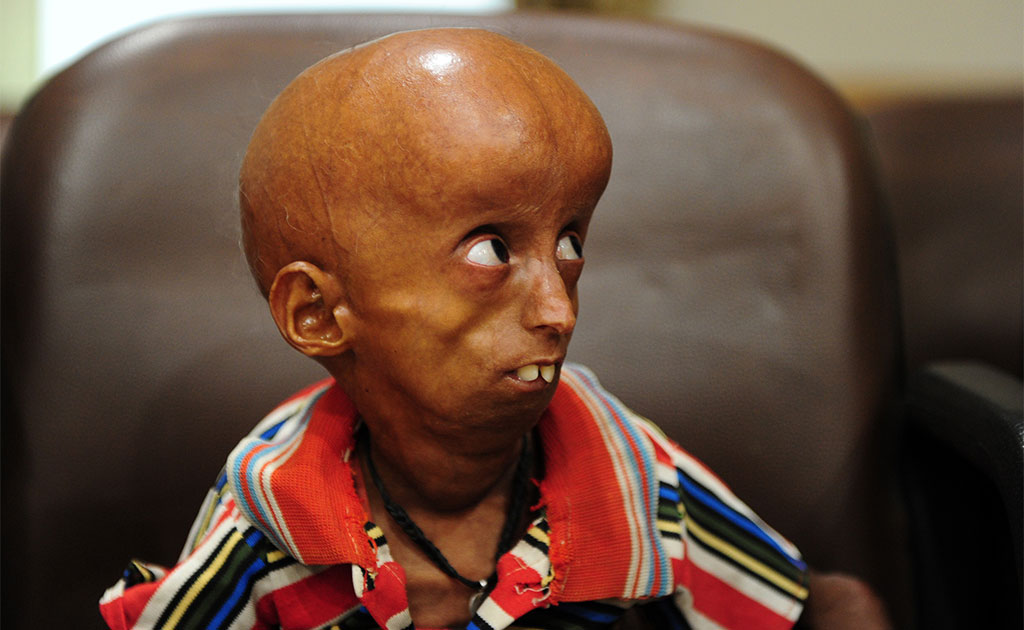 His condition has made him age prematurely and he has developed a distinguishing appearance. His distinct features include a bald head, aged-looking skin, a pinched nose, a small face and jaw relative to the size of his head.

Doctors say that a progeria patient usually lives for 14-15 years and Rupesh is an exception.

Apart from headaches and physical strain of walking that Rupesh bears daily, he also fights another battle – that of putting up a brave face in front of those who laugh at him.

Rupesh’s father Ramapati who rides a rickshaw for a living told Hindi news portal Patrika that a few months back some people who run a circus had come to buy him for Rs 7 lakh, but he sent them back.

In all these tough times, his family, comprising of his mother, father and brother, have always been by his side.

Another important pillar of support in Rupesh’s life has been his doctor Girish Pandey who runs an organisation called Ashutosh Memorial and  provides for his clothes, medicines and other needs.

On Tuesday, his mother Shanti Devi and younger brother Vakil reached Allahabad District Magistrates Office to seek financial support from the government for his treatment.

While the family has been assured government’s help in the past, nothing fruitful had come up so far.

However, intervention by Uttar Pradesh Health Minister Sidharth Nath Singh has brought a new ray of hope for his family.

His tweet also mentions that Rupesh was given health supplements and all his tests were also performed. A ration card was issued to his family and money and home are also being arranged from the chief minister’s fund.

Here are his tweets:

With this encouraging response from the government, Rupesh’s family is now hopeful.

“We are aware he has a short life but we are now hopeful for our son. We are very grateful to the minister who provided us help and took personal interest in the case,” his father told the Hindustan Times.