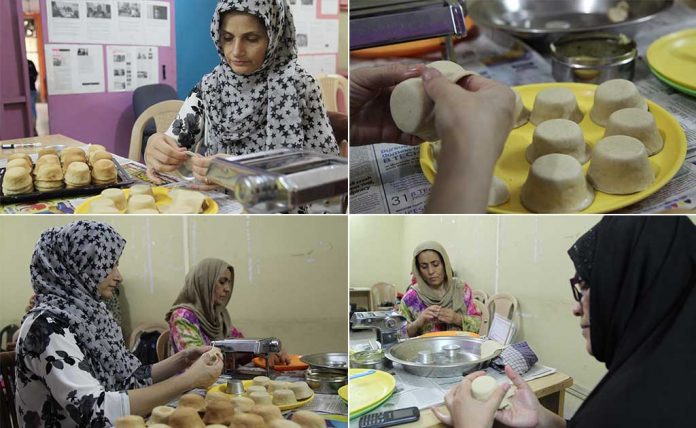 New Delhi:  Farah Naz is used to attracting scathing remarks and disapproving looks from neighbours in her Afghan refugee community as she leaves for work each day.

They tell her she is “not a good woman”, what she is doing is “shameful” and that her rightful place is inside her south Delhi home – caring for her sick husband and five children.

But after fleeing the Taliban five years ago – where she was drenched in kerosene and almost burnt alive, her husband was ordered killed, and her children were threatened with kidnap – the 32-year-old refugee woman is past caring what people think.

She is on her way to becoming a business woman.

“I had no choice but to work, and now I am proud,” said Naz. “I am feeding my family and changing the view of women in my community, but most importantly I am doing a job which is showing that refugees also can do something good.” 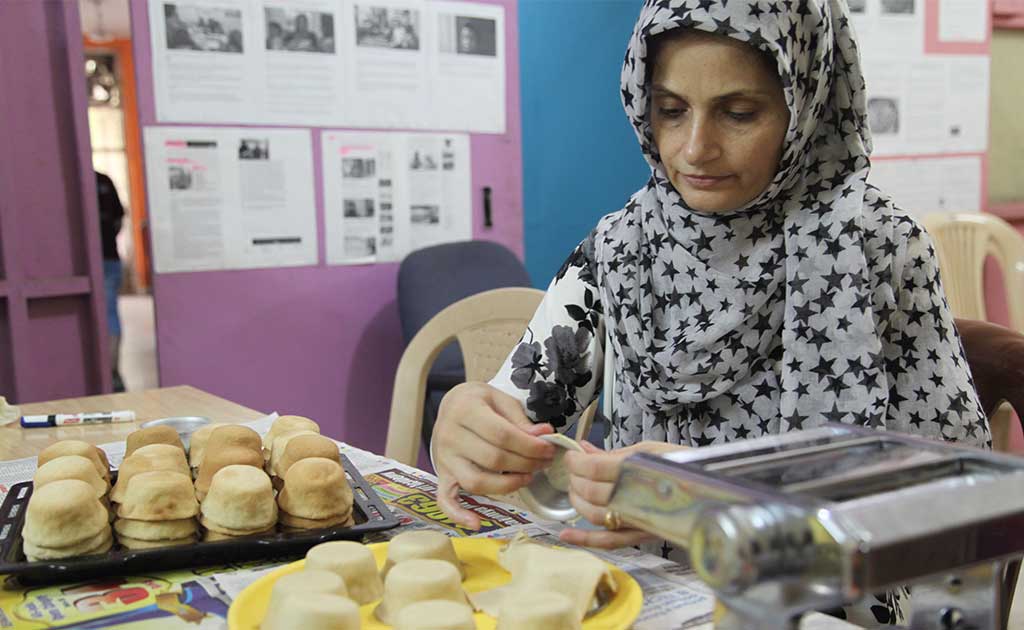 Naz is one of five Afghan refugee women who are not only battling traditional gender roles by going out to work, but who have also become unlikely warriors in the Delhi’s fight to curb plastic waste pollution.

The task is immense and 10 hands will not solve it. But this project is gaining international support for its twin roles of addressing India’s chronic waste problem and empowering refugee women who often flounder in their adopted homelands.

Employed under “Project Patradya” – an initiative led by Delhi University students – the Afghan women produce and supply edible bowls, cups and cutlery to cafes and ice-cream parlours as an alternative to non-biodegradable plastic ones.

Made from millet and wheat flour, the biscuit-like tableware is gaining popularity in the West as a sustainable, environment-friendly option to disposable plastic utensils, and those behind the initiative believe India is an untapped market.

“We wanted to create a social enterprise model which was not only looking at improving the environment but also had a business plan that could employ excluded communities such as refugees,” said 20-year-old commerce student Nishchay Hans. 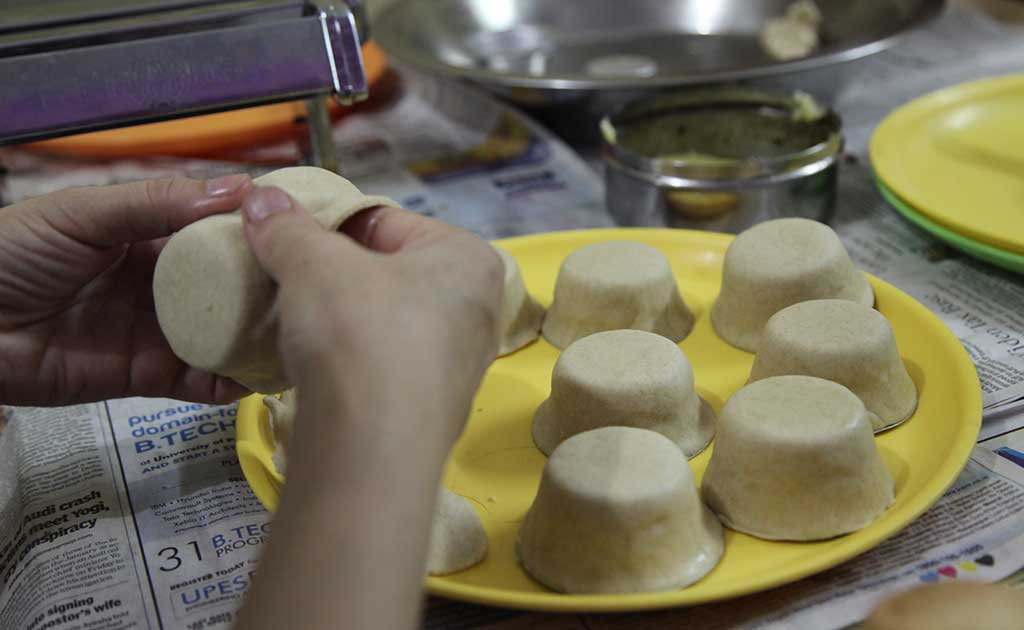 Hans is one of more than 40 students at Kirori Mal College (KMC) who are part of Enactus, a charity that supports young people across the world work with poor communities and build sustainable, eco-friendly businesses.

Their projects range from creating mobile salons for unemployed hairdressers in Ghana to working with villagers in Malaysia to build home stays – all with the aim of eventually handing over the businesses to communities to run themselves.

With New Delhi generating around 650,000 kg of plastic waste daily, only 60 per cent of which is recycled, KMC students honed in on plastic pollution as a serious and neglected social problem.

They found disposable plastic plates, bowls, cups and utensils make up much of the plastic waste in Delhi’s burgeoning landfills, where it can take up to up to 1,000 years to decompose and leak pollutants into the soil and water.

Most of the litter and pollution affecting oceans also derives from plastics. This has dire consequences for marine species, which in turn is harmful for those further up the food chain, including humans, who consume the contaminated fish.

During their months of research, the students visited Delhi cafes and consulted restaurateurs, bakers and customers — eventually settling on the idea of edible tableware as an alternative to use-and-throw utensils.

The students then approached the city’s refugees to join their venture in a move welcomed by the United Nations.

“Not only are refugees learning valuable new skills, they are also part of a meaningful and innovative initiative,” said Ipshita Sengupta, policy associate at the UN Refugee Agency.

“Such projects demonstrate that refugees are active members of our society making positive contributions to the communities they live in.” 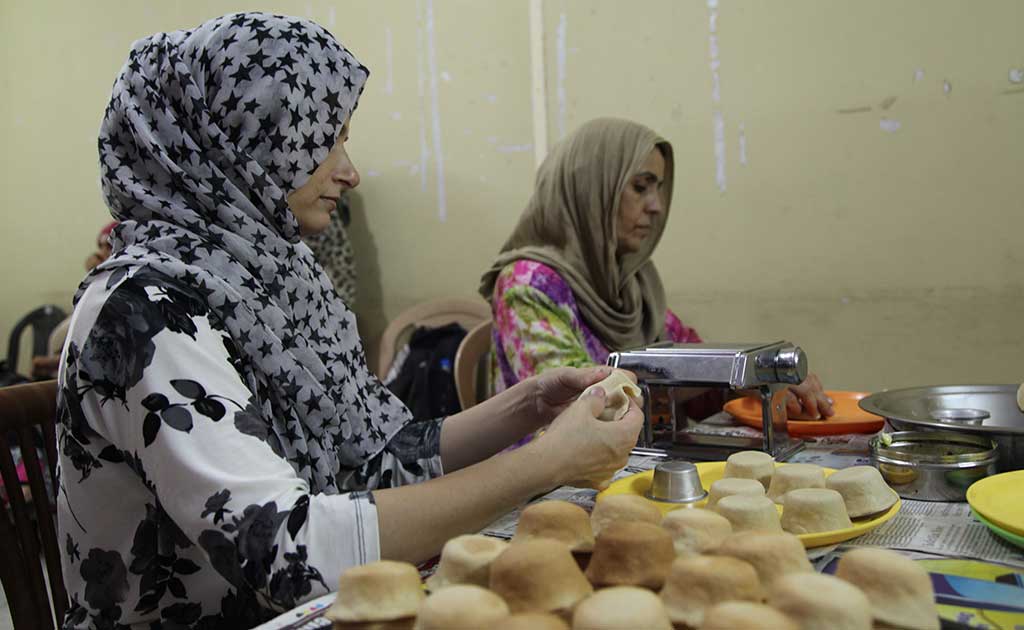 India is home to more than 200,000 refugees and asylum seekers, many of whom were forced to flee conflict or persecution in neighbouring countries such as Sri Lanka, China, Afghanistan and Myanmar.

But the country has not signed the landmark 1951 Refugee Convention, which spells out the legal obligations of states to protect refugees, nor does it have any domestic legislation in place to ensure their basic rights.

As a result, many refugees are vulnerable to harassment and exploitation. They cannot easily access education and health services and endure job discrimination and low pay.

The 11,000-plus Afghan refugees in India fare better than some other poor communities, but many still live hand to mouth.

Opportunities to improve their lives and gain new skills are limited, so when Naz and the four other women were offered the chance to join Project Patradya, they did not hesitate.

Most are the wives of once wealthy businessmen who had good lives in Kabul, but the constant fear of suicide attacks at schools, bomb blasts at markets and death and extortion threats from the Taliban left them with to choice but to flee.

In India now for almost five years, the roles have reversed and these women are the breadwinners – some now widows, others have husbands who are too sick to work or unable to find a job.

They work five hours daily at a charity office, above a hardware store along the bustling narrow lanes of Bhogal market, where they sit around a large table, carefully kneading and rolling dough, cutting and placing it into baking moulds.

As well as making the products, the women are also trained in sales and marketing, meet customers and take orders, with the understanding they will run the business within three years. 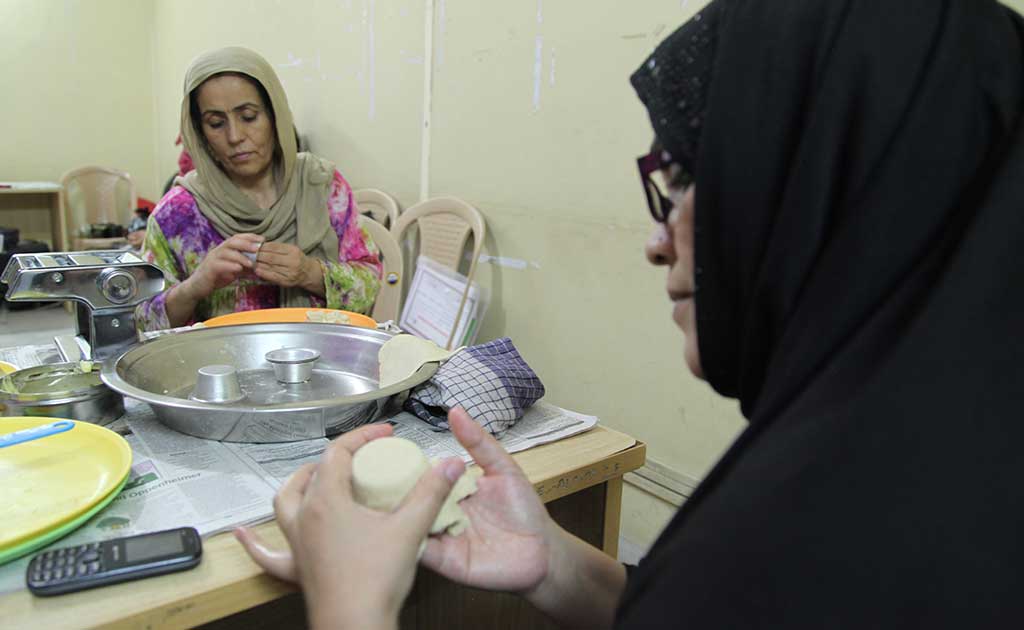 Patradya has been in operation for six months and is currently supplying edible tableware to 10 cafes and ice-cream parlours in Delhi, as well as taking online orders.

The women are turning over a small profit, averaging Rs 7,500 monthly, which is divided equally between them.

“It’s just the beginning, so the money is not much,” said Hasiba Fata, a 41-year-old mother of four, as she sprinkled flour over the ball of dough in front of her.

“But we are excited about the idea that we can become business women and run our own company, employ other people and also do something for the environment. Maybe it’s possible.”