According to the World Health Statistics (2016), nearly 5 women die every hour in India due to pregnancy and delivery related complications. 17 per cent of maternal deaths in the world occur in India. Based on the data from the Rapid Survey on Children (2013), only 65 per cent of children are exclusively breastfed up to six months of age. Infant and child mortality rates are high as well. Child malnutrition in India continues to be amongst the highest in the world (38% children under five are stunted). Provision of maternity entitlements is one of the many interventions that are needed to improving maternal child health and nutrition.

The National Food Security Act (NFSA) provides Rs 6000 as maternity entitlement for all pregnant women. In spite of it being over three years since the passage of the NFSA, the central government is yet to implement a universal scheme for the implementation of this entitlement. A Maternity Benefit Programme (MBP) providing Rs 6000 to pregnant women was one of the announcements in the Prime Minister Narendra Modi’s speech on  December 31. However the MBP, like its predecessor – the Indira Gandhi Matritva Sahyog Yojana (IGMSY), imposes conditionalities such as benefits only up to the first two births and for women who “undergo institutional delivery and vaccinate their children”.

Budget 2017 allocated only Rs 2,700 crores for Maternity Benefit Programme which is less than 30 per cent of what is required for universal coverage. It is estimated that about 2.7 crore births take place in India, each year requiring about Rs 16,000 crores (central share Rs 9,700 crores). In fact, it is not even sufficient to cover the women who will be eligible having met the conditionalities.

Assuming centre-state cost sharing ratio of 60:40, the current allocation would cover about 75 lakh women. By the estimates presented below, even with the conditionalities of two-child, institutional delivery and full immunisation, 103 lakh women would be eligible for Maternity Benefit Programme requiring a central budget of over Rs 3,600 crores. 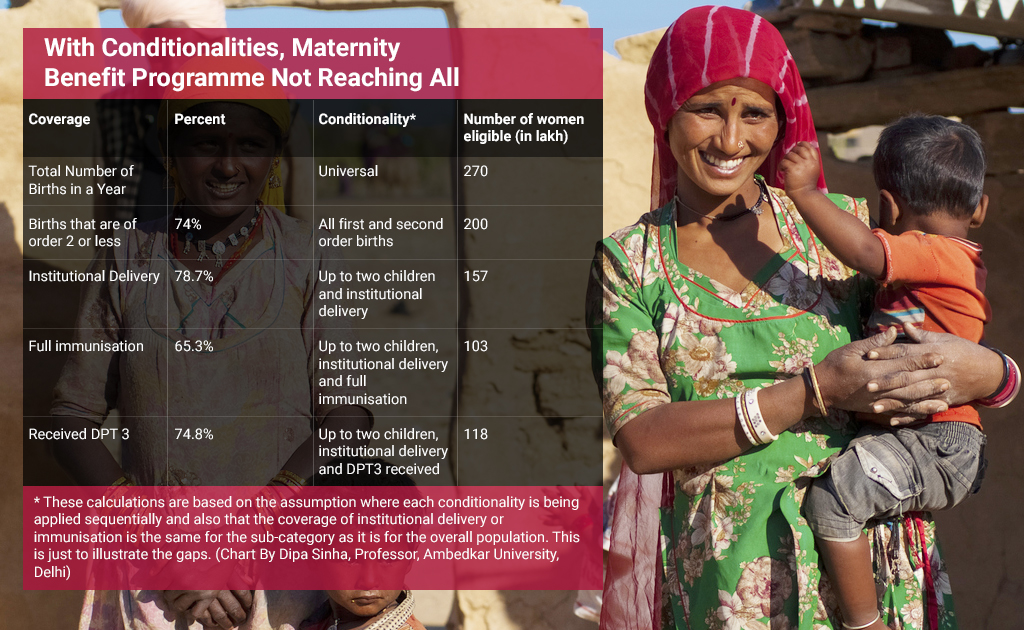 While these estimates are presented to highlight how the scheme is underfunded even by the government’s own norms, the larger issue is that these norms themselves are exclusionary and will keep out those women who most need maternity benefits. The Economic Survey this year argues that there is evidence of misallocation in centrally sponsored schemes with districts that house the most number of poor are the ones facing the greatest shortfall in the allocation of funds. The conditionalities in Maternity Benefit Programme will only further such misallocation.

A number of field studies as well as analysis of secondary data has shown that conditionalities exclude large number of women who are poor, belong to dalit and adivasi communities and live in the poorest and remote areas in the country and need maternity benefits the most.

There also is ample evidence to show that imposing a two-child norm in this manner does not contribute to population stabilisation. Further, these conditions blame the victims and not the system for its failures. Therefore, if a child is not immunised, then it is now the mother’s fault more than that of the health system that failed to make that service accessible in the first place.

A field study conducted by the Centre for Equity Studies (CES) on IGMSY also found that these conditionalities exclude the most marginalised, make implementation more cumbersome and only serve to keep women out. This study also found other problems related to access to bank accounts, timing of payments, fund flow issues, lack of monitoring, transparency and so on. All of these need to be addressed in the expansion of Maternity Benefit Programme.