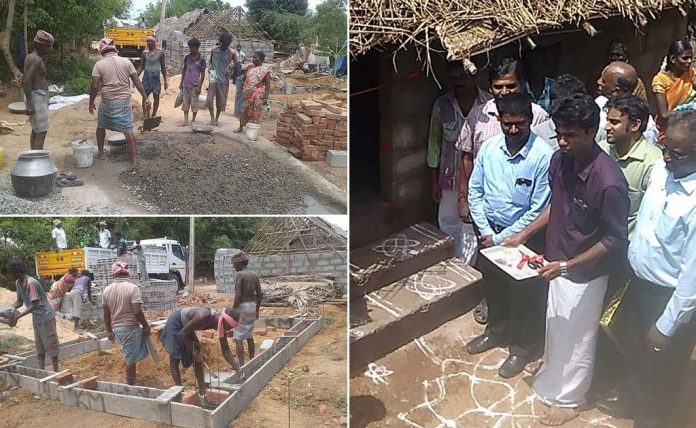 Born into debt bondage, S Appu spent 25 years confined to a rice mill, watching his father repay a debt, and then working tirelessly to pay it off himself.

When he was freed from the mill in Guduvanchery in Tamil Nadu state in 2015, he did not have a place to call home.

“Home had always been the rice mill,” Appu, 27, told the Thomson Reuters Foundation. “I even married there, all the while unaware that there was a world outside that space.”

But today Appu lives in his own house, designed and built by students of Chennai’s Madras Christian College as part of a project funded by NGOs and the government to help rescued bonded labourers get back on their feet.

Before moving into a one-room brick house in December, Appu was living in a makeshift shelter on a piece of land given to him and eight other families rescued from the same mill by the Tamil Nadu government.

“We found them living in temporary shelters during the 2015 floods that swept the region,” said Jesserson Joel, a 22-year-old student, who helped to build Appu’s new home.

“They were practically living in the open, unprotected and exposed. They needed shelter.”

While bonded labour was banned in the country in 1976, it remains widespread, with millions like Appu from the marginalised Dalit and tribal communities working in fields, brick kilns, rice mills, brothels or as domestic workers to pay off debts.

Last year, the government announced plans to rescue more than 18 million bonded labourers by 2030, and increase compensation for rescued workers by fivefold as part of efforts to tackle modern slavery.

But without homes, land and jobs, it is easy for rescued workers to slip back into debt bondage, campaigners say.

“The compensation amount is given, but for all other welfare schemes, including housing and land, they have to fill in forms and follow procedures,” said Sam Jebadurai from the NGO International Justice Mission, which works to rescue bonded labourers and help them rebuild their lives.

When he was asked where he would want to live as a free man by officials that had helped to rescue him, Appu recalls shrugging his shoulders and muttering that “it didn’t matter”.

“Actually, I didn’t even know the name of the village my parents came from,” he said, sitting on the steps of his new home, watching his daughter smother her face with powder.

“And besides, no one had ever asked me what I wanted.”

Appu ended up living with other rescued labourers on the edge of a village in Tamil Nadu’s Kancheepuram district in tents provided by a non-governmental organisation.

“These generational bonded labourers, all from the Irula tribes, had practically been forgotten,” said Prince Solomon, assistant professor and field coordinator for the college project.

“One of my students waded through a lake to reach them.”

Shocked by their plight, the students quizzed the families about their needs and began mapping out a project to build them permanent homes.

A dream home they can call their own

By mid-2016, the foundations of the first set of homes had been laid. Each family promised to work with the students to develop their homes, replacing plastic and asbestos sheets with concrete pillars and roof.

Appu said with its garden, enclosed bathroom and a tiled roof, his house was a dream home.

The homes which were designed to be held up by stilts, sit three feet above ground to limit the damage done by future flooding.

Another key feature are proper toilets to replace the open-air bathing areas used by women – known as “four sticks and a sari” because they are formed by planting sticks in the ground around which women wrap their saris for privacy while bathing.

“A woman told me that she finally felt safe,” Joel said.

“Earlier, they used the forest as a toilet, always wary of snakes and never venturing out after sunset.”

The pace of construction has depended on the flow of funds. The students are waiting for another injection of cash to complete house number 12, the last home at the end of the street.

“It’s good to have a proper roof over our heads,” a group of women told the students.

“We want our children to study, do well and then build an even bigger house where we can all live together.”