Wasting, defined as low weight-for-height, results from acute malnutrition and frequent infections such as measles, diarrhoea, pneumonia, meningitis, malaria and other forms of fevers. Globally, malnutrition accounts for about 45% of all deaths among children below 5 years with poor nutrition accounting for about 50% of total child deaths in India.

South Asian countries in general and India, in particular, are on the policy radar for nutrition-related interventions as more than half (27.6 million) of the global 51.7 million wasted children live in this region. Recently released National Family Health Survey data shows that wasting is perhaps one of the very few indicators that have deteriorated over the last decade- from 19.8% in 2005-06 to 21.0% in 2015-16. 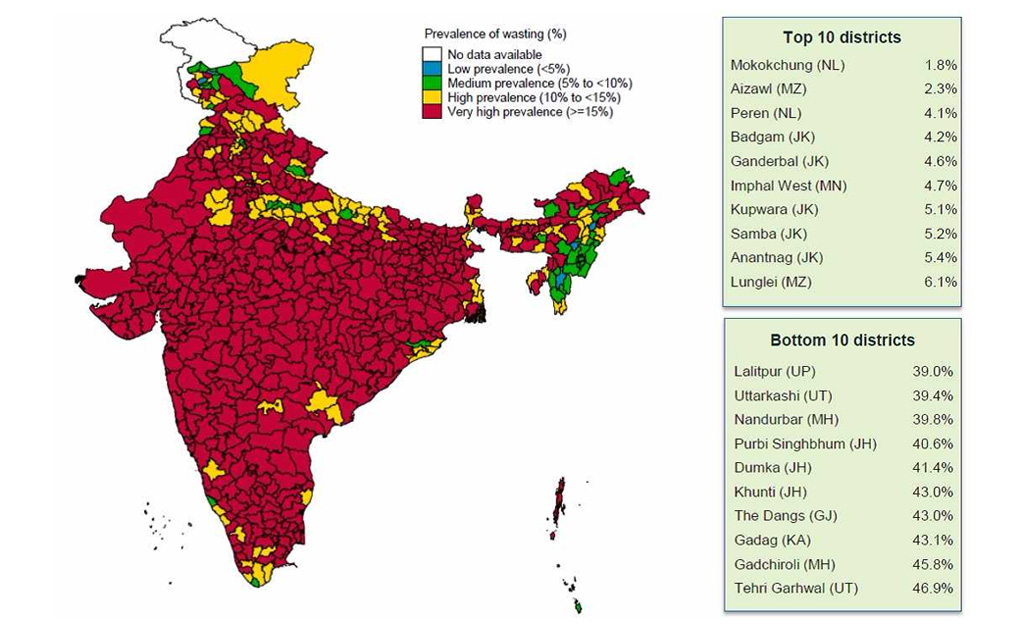 With strong links to severe malnutrition, wasting shows a significant rise during natural calamities such as drought and floods as well as lean agriculture periods. But in the Indian context, such high prevalence can have significant associations with poverty, food insecurity, poor health care and low awareness about complementary feeding practices.

Given the rising prevalence, India is deviating far from the global targets set by the World Health Assembly (WHA) of reducing and managing wasting to below 5% or the Sustainable Development Goals (SDGs) for the elimination of malnutrition. In fact, it will be an uphill task to achieve the SDG target of elimination of wasting by 2025.

International Food Policy Research Institute’s (IFPRI) analysis of the district-level data of Rapid survey on children, 2014 finds moderate wasting widespread across 487 districts in India (Figure 1). However, severe wasting is found to be limited to some 160 districts with 37 districts having more than 15% of children severely wasted.

NFHS 2015-16 shows a bleak picture. The existence of interstate and intra-state inequalities in the prevalence of wasting is high. Although widespread across India, Mizoram (6%) with lowest wasted children ranks 1st whereas Jharkhand (29%) has almost five-times higher than the best-performing state (Figure 2). 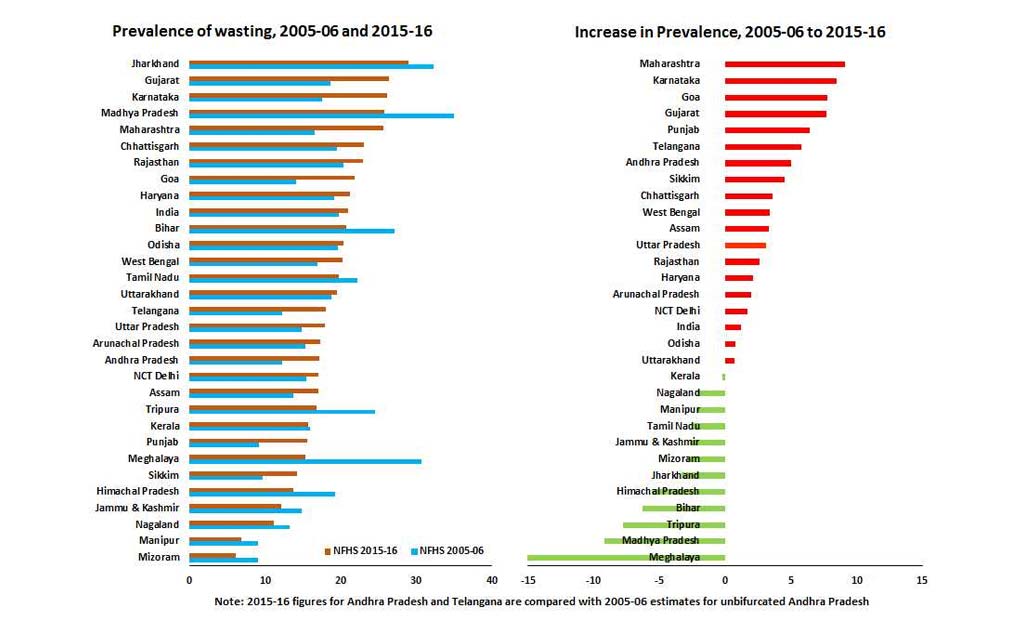 Between 2005 and 2015 the reduction in wasting only happened in 12 states as against increase in 15 states. It is worrisome to notice that increase happened mostly in the states that are doing better, economically, like Maharashtra (9.1%), Karnataka (8.5%), Goa (7.8%), Gujarat (7.7%) and Punjab (6.4%), which could be indicative of economic conditions of the migrants that these states are receiving. Simple things like employing and housing the migrants in sanitized conditions with access to health facilities will take care of the problems.  Nearly 481 districts spread across various states have more than 15% of wasted children. Among them, 79 districts have levels more than 30% wasted children.

On the other hand, there are certain states which have relatively lower average prevalence but disturbing inter-district differentials (figure 2). For example, Kerala has an overall prevalence of 15.7% but across districts, it ranges from 9.7% in Kasaragod to about 24% in Wayanad and Idukki having a considerable proportion of the tribal population. Similarly, Uttarakhand has an overall prevalence of 19.5% but the prevalence in worst performing district of Tehri Garhwal (46.9%) is more than five times higher than Nainital (9.0%). This phenomena of polarisation of the districts in India has been found to be in overwhelming majority and is examined for further scrutiny by colleagues like Bakshi, Chawla and Shah.

Figure 3. Districts with highest and lowest prevalence of wasting as per NFHS-IV, 2015 for select states 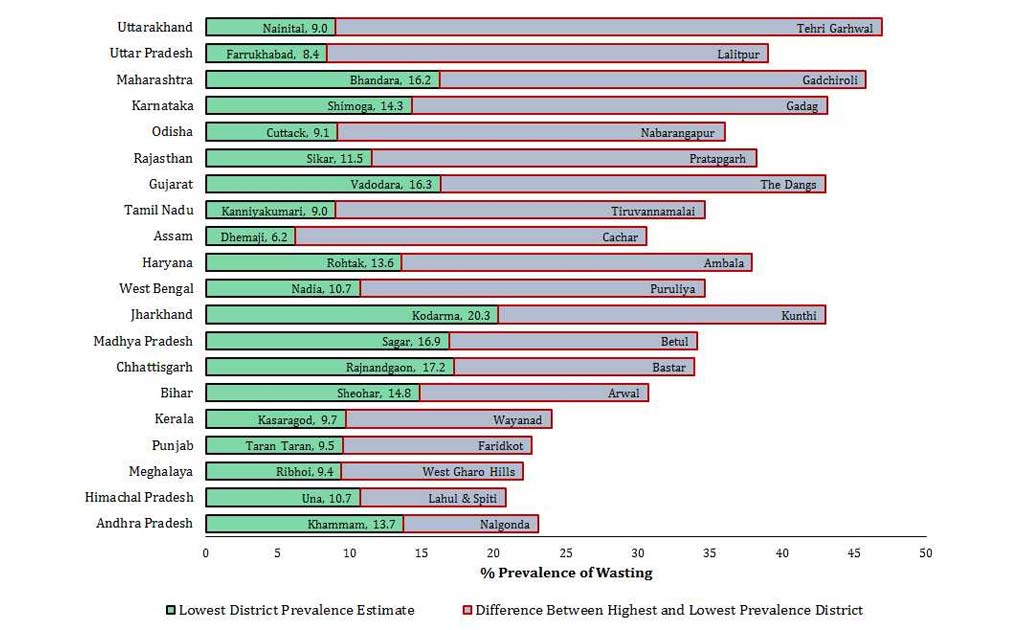 Wasting and severe wasting can manifest into poor physical growth that can elevate the risk of contracting common illnesses further reinforcing the poor outcomes. It can co-exist with stunting and underweight leading to the long-term consequences of impaired cognitive ability and poor learning outcomes. Furthermore, for underweight and stunted girls, it invokes a vicious cycle whereby initial malnutrition with early child-bearing gets translated into poor reproductive health outcomes.

In contrast to stunting and severe malnourishment, wasting is easily reversible once the impact of infectious disease recedes and health status improve.  However, severe wasting requires concerted medical attention along with appropriate nutritional intake.  In 2010 The Lancet published a study with evidence-based public health interventions to mitigate acute wasting.  Accelerated gains are possible with disease prevention and management of severe acute malnutrition (SAM) among newborns and children.

Another set of interventions include vaccination for measles and rota virus, Vitamin A supplementation, fortification, deworming, food rations, administration of oral rehydration salts (ORS) with zinc during diarrhea, counseling for complementary feeding by ASHAs and ANMs and improved water, sanitation, and hygiene (WASH) environment.  However these interventions does not undermine the periconceptional nutrient supplementation or maternal balanced diet and nutrients supplementation during pregnancy. Secondly, studies have highlighted the issues of knowledge gap and effectiveness of link workers in delivering the change that they were envisaged to bring.

While things might appear dismal, the acute malnutrition can be mitigated with the implementation of well-designed policies with sustained participation in designing and implementation of all key stakeholders like frontline health workers, humanitarian and development organizations and community. However, low-income countries often suffer from underfunded public health system that lacks infrastructure and policy support.  For instance, a study by World Bank in 2010 costed 13 key interventions for treating malnutrition in India and pegged resource requirement of about Rs 43 thousand crores per year (USD 6.6 billion) along with complementary efforts towards health system strengthening. There are also positive externalities to investing in health as it creates better work force with increased productivity.

The investments addressing the issues of undernutrition in general does comprehend the larger nutrition security offering long-term gains. Although, ICDS and NRHM have an emphasis on nutritional intake but implementation and effectiveness of these programmes haven’t yielded major gains. To add to that the fiscal restructuring that is underway through the Fourteenth Finance Commission, the centrally sponsored schemes have received major impact with ICDS receiving a major cut back. The proposed outlays to ICDS are decreasing with each passing year. With the new norms of funding of centrally sponsored schemes under the FFC, the budget cuts were deeper for nutrition specific schemes like ICDS, and the Mid-Day Meal Scheme (MDM).

The onus of increasing the spending on nutrition-specific schemes lies with the states and a study found that states haven’t been asserting their fiscal autonomy on nutrition programs.

On the other hand, the effectiveness of the newly introduced Institutional feeding program – nutrition rehabilitation center – is found to be limited and fragmentary given high dropout rates owing to far lower compensation rate than daily wages.

The gains of the feeding could not be sustained in the long-run due to lack of counselling of mothers on preparation of the therapeutic diets.  Similarly, programmes such as PDS and MGNREGA does aim to ensure food security and reductions in absolute poverty but its impact on child under-nutrition appears to be rather minimal.

Policies and programmes are also hurdled by implementation scope and strategic design.  For instance, targeting versus universal coverage is a long-standing concern of such interventions but certainly the latter approach merits more attention. Most of the targeted programs fail in enrolling the worst hit in the first place.

Clearly, without concerted, well-rounded policy focus and adequate resource commitments it is likely that the prevalence of wasting may persist at a higher level and discount the future of the nation.