Every evening, the courtyard outside Muskan Ahirwar’s mud-paved house in the Durganagar slum of Bhopal transforms into a library. The 9-year-old then plays librarian.

But, it is no game. Children from other homes pour in to read here. They eagerly wait for her every evening to set up the library.

It all began in January, when officials of the government’s state education centre which has an office in Arera hills near the slum where Muskan lives, decided to celebrate the New Year with the slum children. They distributed books among the children. 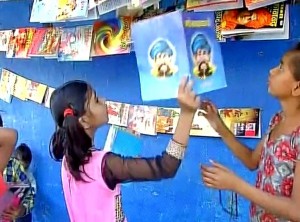 And, they were pleasantly surprised when the officials discovered Muskaan and her friends were fond of reading. It was then that Muskaan volunteered to run a library for the slum’s children.

The library at her house was inaugurated on January 26 and now has nearly 200 books. Initially, it attracted a few children but soon turned into a crowd-puller. Every evening now, the children of the slum wait for Muskan to return from school and set up the library so they can read books.

Seeing the resounding success Muskan’s library has been, the state education centre is now considering a proposal to start more such libraries in other slum areas of Bhopal.