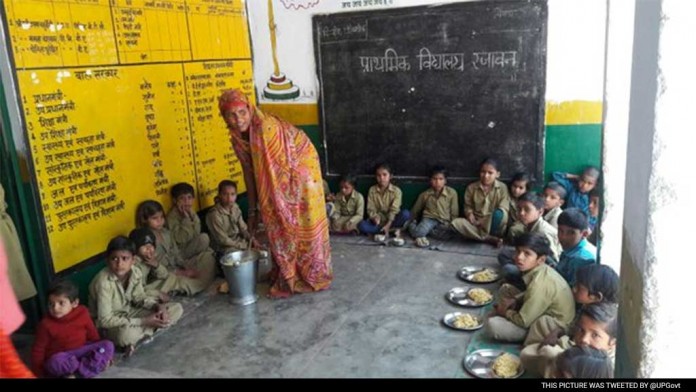 LALITPUR, UTTAR PRADESH: : A day after NDTV reported how schoolchildren in the drought-affected Lalitpur region of Uttar Pradesh were not being served mid-day meals, the government says it has restored the facility.

The state government tweeted pictures of children at the government primary school of Bhardona in Lalitpur on Friday afternoon, who had issued an appeal through NDTV, being served lunch in school.

Mdm meals being served at the school at Lalitpur after the intervention of the district Admn. pic.twitter.com/XOHEqrwb12

For the past month, several schools in the drought-ravaged region had told NDTV, they had stopped serving mid-day meals to students.

For the children, many of whom came from farming families struggling with drought and debt, a hot and nutritious meal the highlight of school day. “I loved terai (soya nuggets). I want it back, all my food,” said a Class 5 student. “We can’t study well for so long without eating food,” added another. The children issued an appeal through NDTV asking the government to restore the mid-day meal at their school.

With the day at school spread between 9 am and 3 pm, the school said many children who went home for lunch did not bother to return. Also, in a school of 150, 50 students had dropped out.
Policy-makers have often listed mid-day meals as a major incentive for children to attend school in many parts of the country. The scheme also allows the state to step in and curb nutritional deficiency among school going children. India accounts for more than a third of the world’s stunted children.

Lalitpur is part of the Bundelkhand region, which is half in Uttar Pradesh and half in Madhya Pradesh and is reeling under a severe drought. Many children in the area get nutritious and expensive food like dal only in school since their poor parents get only rice or wheat under food security or PDS schemes. For many, the mid-day meal at school is the main meal of the day.

Uttar Pradesh was among several states that told the Supreme Court last week that the mid-day meal is an important tool for providing relief in their drought-hit areas. They claimed children were getting milk once a week and meals were being cooked even on holidays.

After the report, the state government had tweeted to say it would investigate the matter and run a special campaign to assure ration is moved swiftly. This morning, it tweeted to say, “Divisional Commissioners have set up special task force to check the MDM & to take action against the delinquent.”