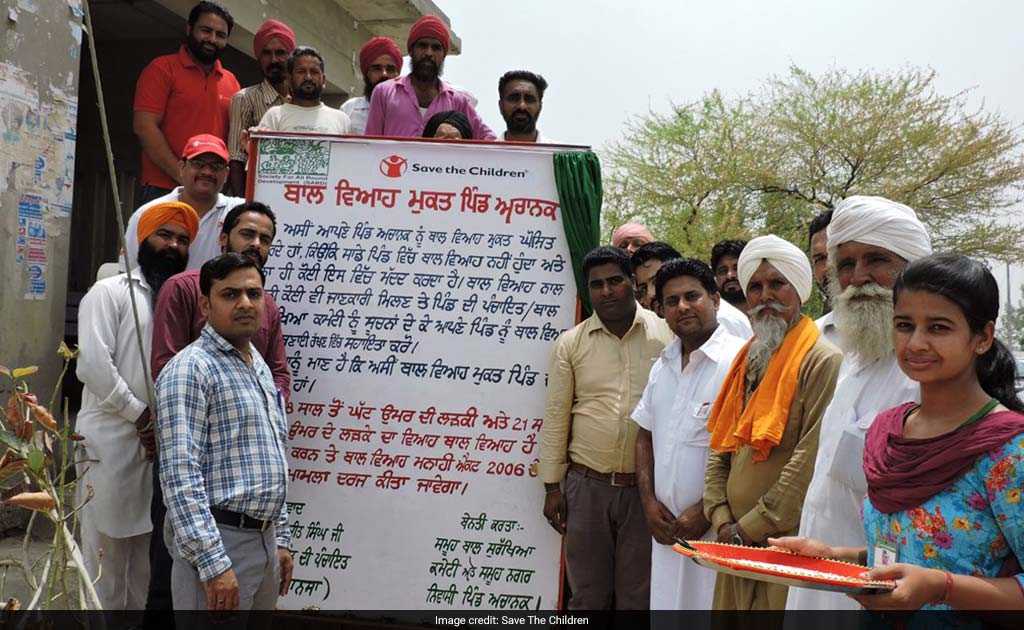 It reads, “We declare our village free from the practice of child marriage. We do not allow child marriages here or support this tradition.”

It further says that anyone who gets information about a child marriage taking place here should inform the child protection committee of the village. “We are proud that we are natives of a child marriage free village,” it reads.

In the last decade, Punjab has shown a drastic dip of 12.1 per cent in the number of incidences of child marriage.

While the state has registered 7.6 per cent cases of child marriage, Mansa district is reported to be lagging behind with 13.3 per cent of such cases, as per data from National Family Health Survey 2015-16.

“Since Mansa is famous for cotton cultivation, it attracts higher number of migrant labourers and their families from Rajasthan and Uttar Pradesh. This contributes to child marriage occurrences. Villagers’ ignorance is also to be blamed,” said one of the villagers from the district.

Achanak village in the district, however, has set a stellar example. In this village, the last instance of a child marriage was reported an year ago and that too was successfully averted by Child Protection Committee members.

Paramjeet Singh, Sarpanch of Achanak village said that many women had come forward admitting incidences of violation and abuse. “We carried out awareness rallies and door-to-door visits to prevent any such incidences,” he said.

Following this, a resolution was passed in the panchayat and it made submission of date of birth proofs of the bride and groom mandatory for all the marriages.

Village Gammiwala was quick to follow the idea. “We roped in religious leaders and used gurdwaras to make announcements about stopping child marriages. It further strengthened our efforts,” said  Sarabjeet Kaur, Sarpanch of Gammiwala village.

“Villages such as Gammiwala and Achanak have demonstrated that an aware and alert community can contribute towards ensuring children’s well-being,” said Jatin Mondar, Project Director of Save the Children, a non- profit organisation that is supporting Punjab government’s efforts in 550 villages to strengthen child protection rights.

“We congratulate the villagers for this progressive step and we want every other village in Mansa to follow them,” said Mansa Deputy Commissioner Dharam Pal Gupta.

The villagers have also been felicitated by Mansa district administration with a certificate.