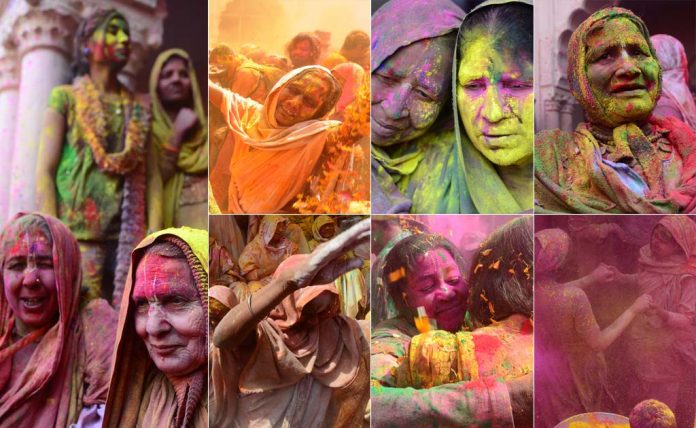 A riot of colours took over the 400-year-old Gopinath temple as hundreds of widows clad
in white sarees, smeared hues of reds, yellows and greens on each other and celebrated Holi. Here are the glimpses from the celebrations:

Elderly women from Vrindavan and Varanasi gathered at one of the oldest Krishna temples in
the crowded Gopinath Bazaar earlier this week, to shun taboos and celebrate Holi.

“Their participation in Holi symbolises a break from tradition which forbids a widow from wearing coloured saree, among many other things,” Bindeshwar Pathak, founder of NGO Sulabh International, that organises the event here, said. [SOCIAL_ICONS]

The ritual of widows celebrating the festival of colours among themselves began only in 2013, before which they were allowed to play Holi only with Thakurji (Lord Krishna).

Meanwhile in Nandgaon, local traditions of Lath Mar Holi were celebrated as veiled women beat men of the neighbouring town Barsana with ‘lathis’.

According to the ritual, as the women hurl canes at the men, the latter try to shield themselves from being hit, lest they are made to cross dress and dance.

The vermillion-hued celebrations also saw people from both the towns singing folk songs and hymns at the Radha Rani Temple in Barsana.