There was a 24 per cent rise in rural women accessing public healthcare between 2004 and 2014, according to a new report by Brookings India, a think tank, significant in a country where half the rural population uses private healthcare, which is four times costlier.

Overall, there was a six per cent rise in dependence on public healthcare for out-patients and seven per cent for in-patients over the decade ending 2014, said the Brookings report, which analysed National Sample Survey Office (NSSO) data over this period.

An in-patient is formally admitted for at least one night to a hospital, while an out-patient visits a hospital, clinic, or associated facility for diagnosis or treatment. 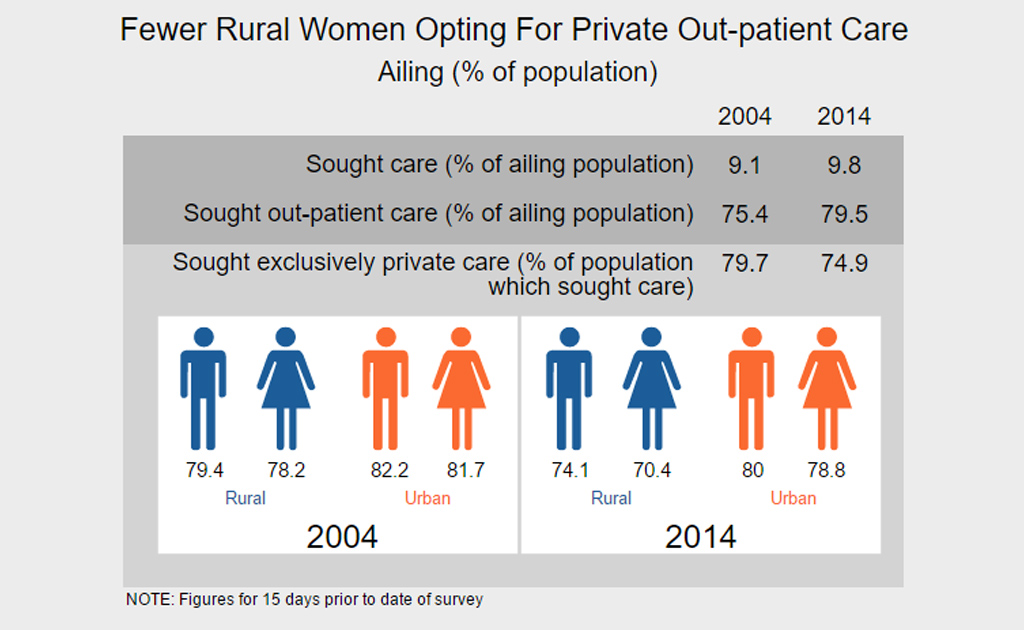 “The number of people seeking private healthcare, however, might be an underestimation, as NSSO surveyors are instructed to mark all those who went to both government and private facilities as ‘only going to government facilities’,” said the Brookings report.

Indians spend eight times more in a private hospital than a government hospital, according to an analysis of National Health Accounts (NHA) 2013-14 data by The Hindu newspaper.

Despite the decline in exclusive dependence on private care, 29 of every 1,000 Indians pointed to the unsatisfactory quality of healthcare, the most commonly cited reason for not accessing a public hospital.

Long waiting periods at government health services appears to be an increasing bottleneck in seeking public care. In 2004, 6.8 of every 1,000 cited this as a reason for not using a public hospital; it rose to 18.6 in 2014.

Public-health centres across India’s rural areas — 25,308 in 29 states and seven Union territories – are short of more than 3,000 doctors, the scarcity rising 200 per cent (or tripling) over 10 years. 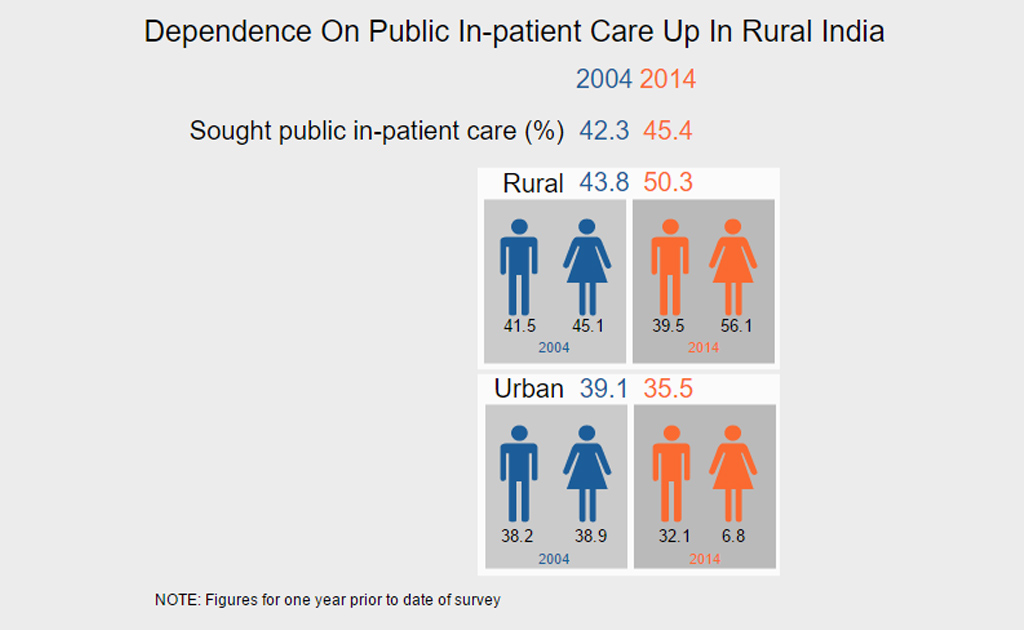 There was an increase, however, in the proportion of people not seeking services, as they felt their ailment wasn’t serious enough, and more women than men report not using healthcare due to the same reason – the gender gap has widened over the decade.

More Indian men are likely to be admitted to hospital during the last moments of life than women – 62.5 per cent to 37.5 per cent, as IndiaSpend reported. For every 1,000 men whose death is certified by medical professionals, the corresponding figure for women is 600.

The number of people not using healthcare due to financial reasons reduced from four of every 1,000 in 2004 to 0.7 in 2014, said the Brookings report, possibly a result of rising incomes or use of publicly-funded health-insurance schemes implemented over the last 10 years by the central and state governments.

About 12 per cent of the urban and 13 per cent of the rural population got health insurance through the Rashtriya Swasthya Bima Yojana (National Health Insurance Scheme) or similar plans.

(In arrangement with IndiaSpend.org, a data-driven, non-profit, public interest journalism platform. Devanik Saha is with the Institute of Development Studies, University of Sussex. The views expressed are those of IndiaSpend. Feedback at respond@indiaspend.org. Read the report on IndiaSpend: http://www.indiaspend.com/cover-story/rural-women-are-increasingly-accessing-government-hospitals-77304)