While the media are paying deserved attention to the reeling crisis of this multi-dimensional drought in India, the states of the Union have responded in a slightly mild manner as compared to the drought caused by insufficient rains in 2009.

The drought is multi-dimensional, because cities are facing scarcity of drinking water, farms are already dried, industries and sugar factories have stopped production, power plants have been shut down, affecting not just agriculture, but overall economic well being of people, including health.

The state of Gujarat, while responding to the petition in Bombay High Court by the organisation Swaraj Abhiyan, declared scarcity in 526 villages (in four districts). The court reprimanded the rapidly developing state along with Haryana-a state with one with the highest per capita incomes-and Bihar, for not responding promptly to the water crisis by not declaring drought.

Haryana has still not declared it, while Bihar clarified in court that criteria for declaring drought have still not been met in one of the poorest states, reporters told IndiaSpend.

The 2015-16 drought is, without a doubt, severe–and in some parts of the country, unprecedented–but more districts were declared drought-hit by more number of states in 2009-10, as compared to 2015-16.

This makes the drought in 2009-10 more severe than the current one, going by the numbers.

The deficiency in June to September rainfall in these years is also an indicator of the intensity of corresponding droughts.

India Meteorological Department, or the IMD, has forecast a normal to excess monsoon in 2016, with only 6% probability of below normal rainfall–that is, a negligible chance of ‘hydrological drought’–deciding the fate of rural economy of the country in 2016-17. Hydrological drought is a scarcity situation caused solely due to deficient or scanty rains.

Due to insufficient rains, major reservoirs in the respective states were only partially filled at the end of monsoon. Come April, the situation has worsened. As many as 91 major reservoirs in India now contain 24% water, the least they have contained in the decade. 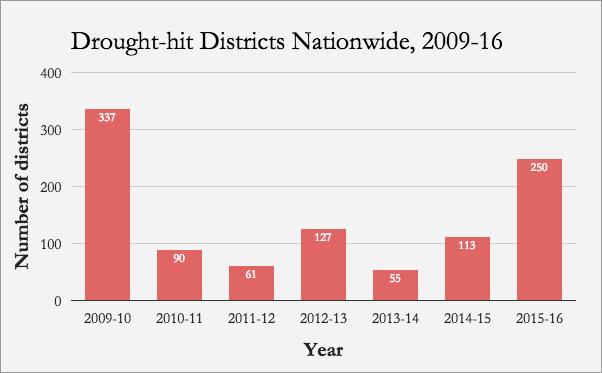 Maharashtra, Gujarat and Telangana contain less than half the water normally available in the month of April, in 2016. Karnataka, Chhattisgarh and Jharkhand contain less than 20% of the normal availability in April (normal = average of last 10 years).

Marathwada region in Maharashtra has received less than normal rainfall for three years in the last four, making the crisis in the region unprecedented.

Ten lakh litres of water was supplied to Latur-the most discussed drought-affected region-and adjacent villages via train last week. Rainfall in Marathwada touched the lowest in 100 years in consecutive years 2014 and 2015, as IndiaSpend recently reported.